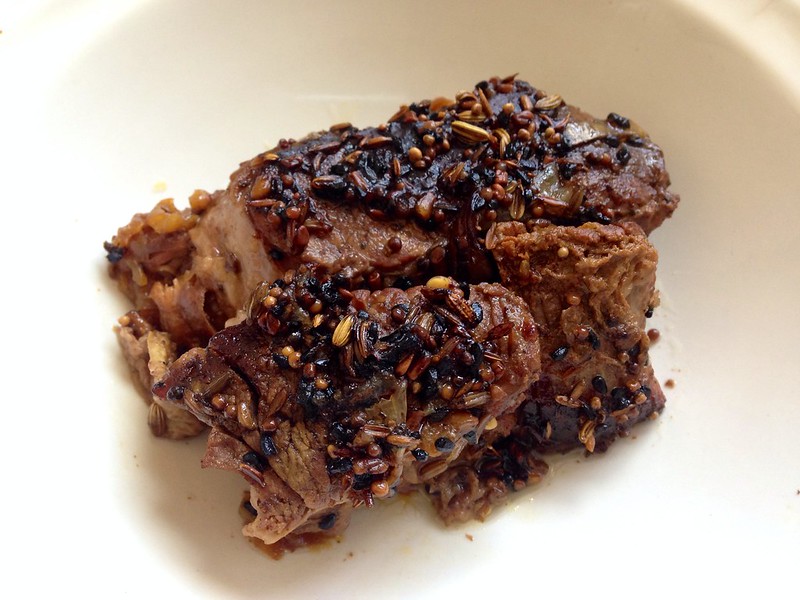 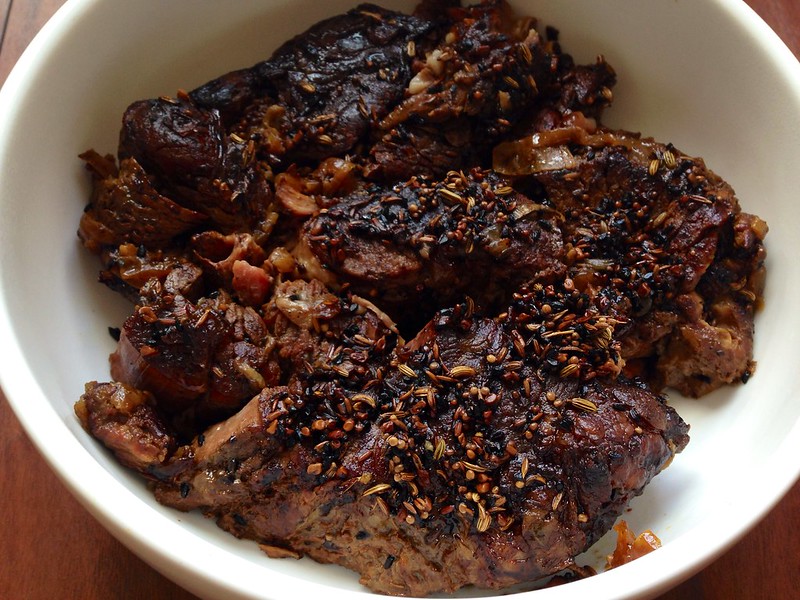 One of my favorite workplace rituals is my weekly walk around campus with E. I always look forward to these breaks for reasons beyond the fresh air alone. E not only listens to me prattle on endlessly about diet and exercise — she geeks out, too! The lady is a total fitness powerhouse/lifestyle guru, having dug deeply into all sorts of health issues. If I have a question about a strange muscle twitch or vegetable anti-nutrients, I know I can turn to her for some encyclopedic knowledge-dropping. Our walks are a safe space for our inner nutrition nerds to emerge.

During one of our recipe-swapping sessions, E recommended that I look into panch phoron. Also known as Bengali five-spice, the blend includes whole pods of nigella, mustard, fenugreek, fennel and cumin. I immediately filed the idea away for a rainy day, figuring I wouldn’t be able to procure such obscure ingredients any time soon. As luck would have it, though, I frequently came across the pre-made mix on the shelves of health foods stores. Each time, fearing I wouldn’t encounter such a rare seasoning again, I purchased it. The other day, after yet another packet of panch phoron tumbled out of my pantry, I studied my stockpile — and then got to cooking. 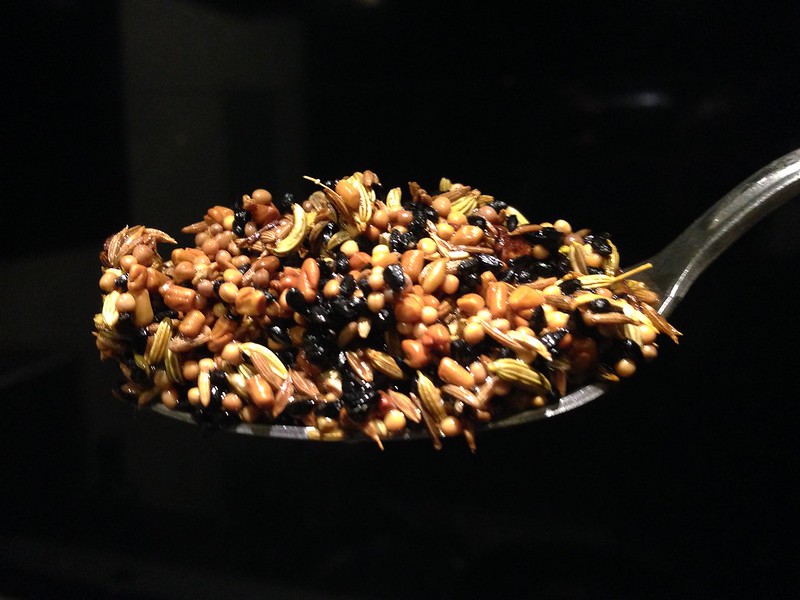 I decided I wanted this experience to involve the slow cooker and, for the first time in a long time, red meat. I love lean protein, but a girl can only have so much chicken! Besides, one whiff of the spices told me its funky complexity would pair well with the richness of beef. Blindly, without a recipe, I felt my way through the process. In a single pan, I systematically seared some chuck, browned aromatic alliums, and tempered the panch phoron. Into the crockpot the entire mess went.

Eight hours later, the entire apartment smelled intoxicatingly, wildly delicious — but even so, the roast’s aroma didn’t prepare me for its fall-apart tenderness or complex flavor. The panch phoron seeds, swollen but still pleasantly crunchy, had infused the beef with an indescribable savoriness: earthy, piquant, ever-so-slightly floral and bittersweet. I served the dish with jammy stewed onions, spooned straight from the same crockpot, and luxuriated in my spice-centric success.

The next day, I emailed E to thank her profusely for the recommendation. I didn’t tell her about the multiple bags of panch phoron I still had tucked away in my spice cabinet; I’m sure their days are numbered, given my discovery of the magic within. 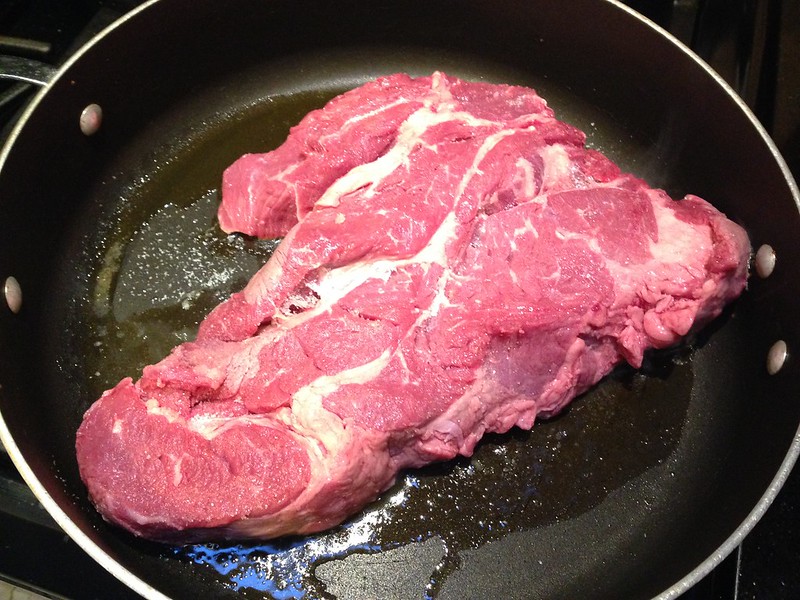 Searing the meat on all sides. 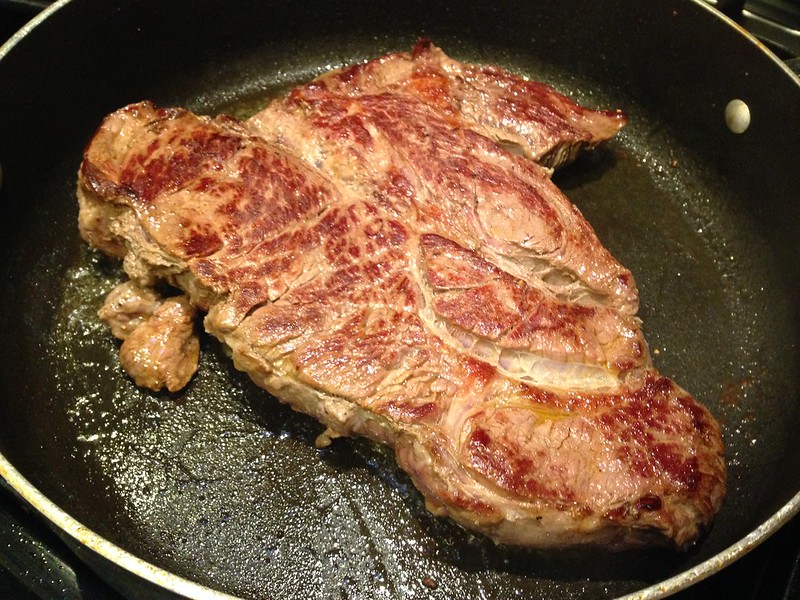 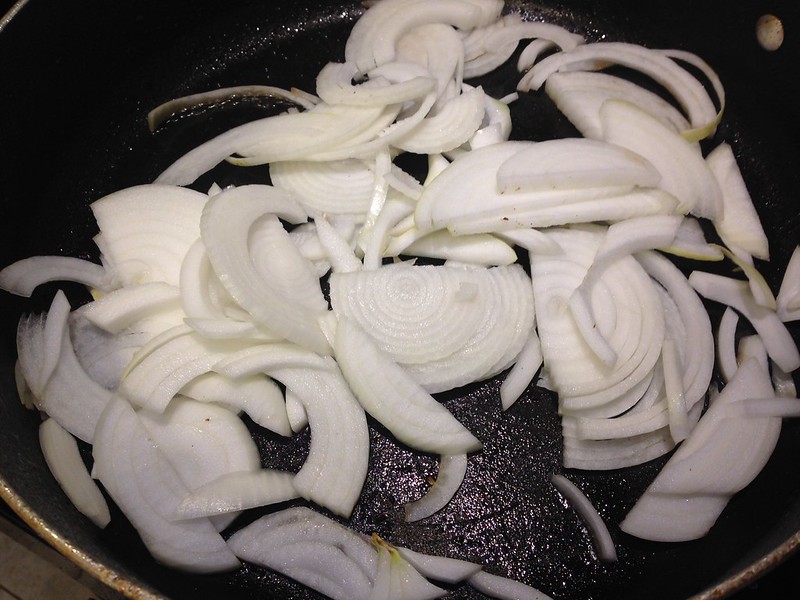 Browning the onions in the same pot. 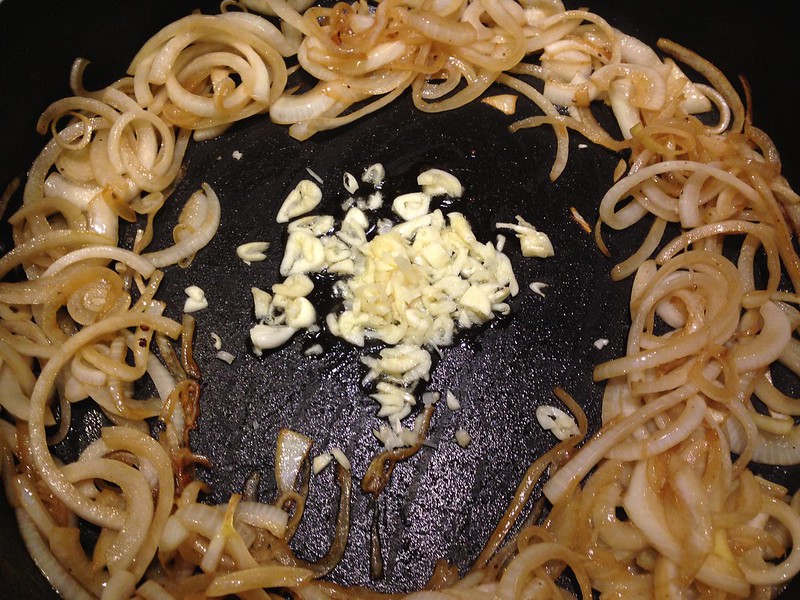 I like to cook the garlic in its own pool of oil to ensure even browning. 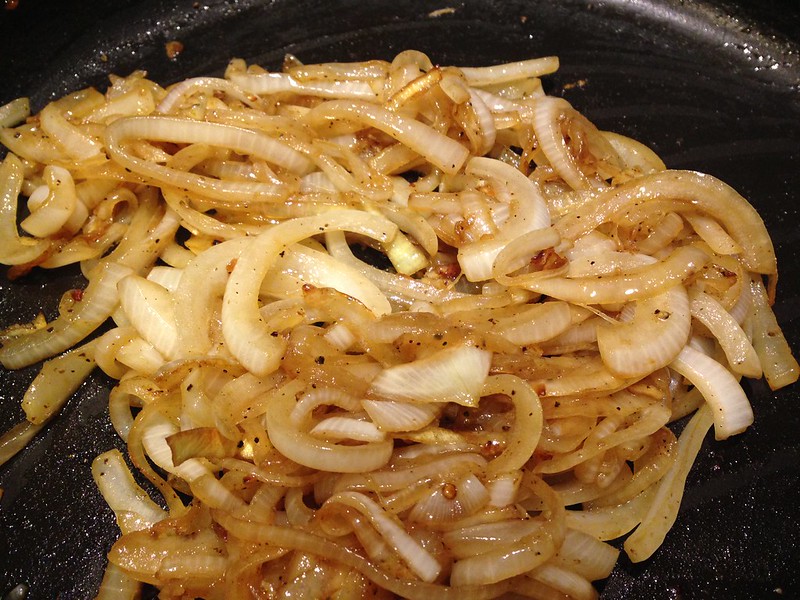 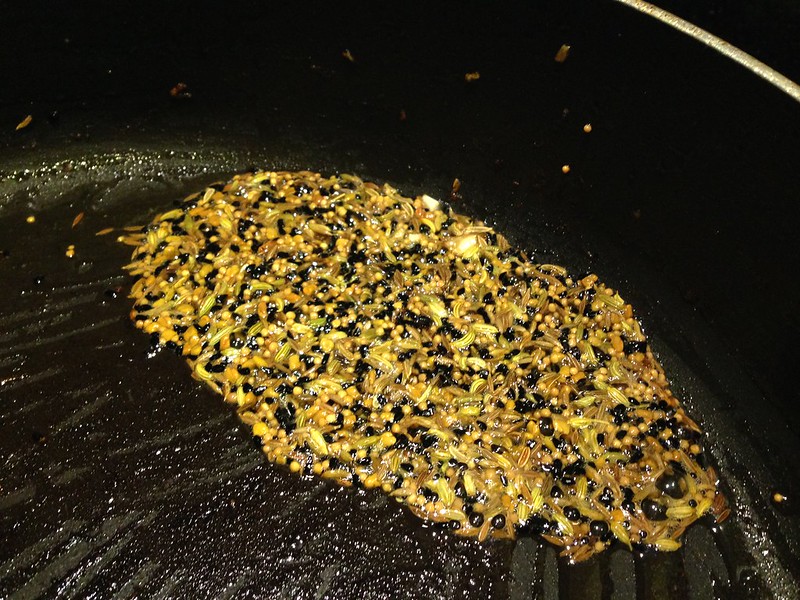 Blooming the whole spices in a bit of ghee to “pop” them and open up their flavors. 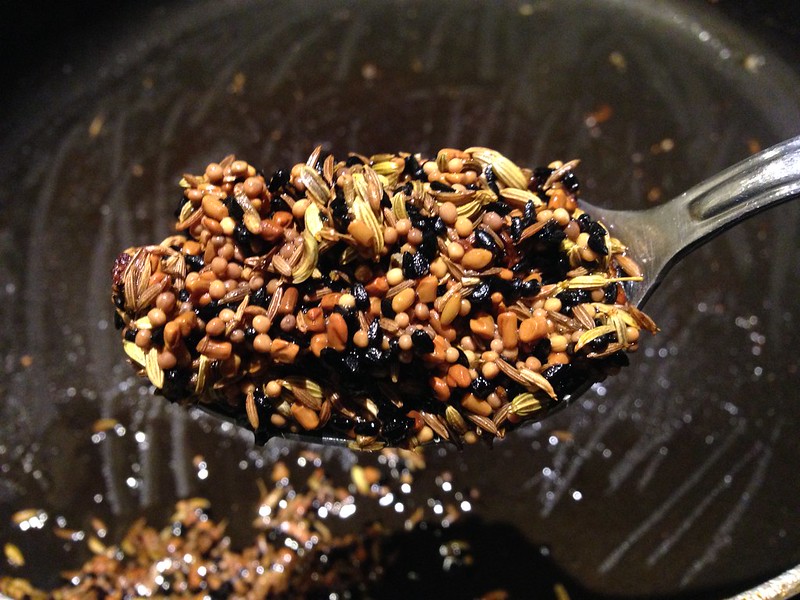 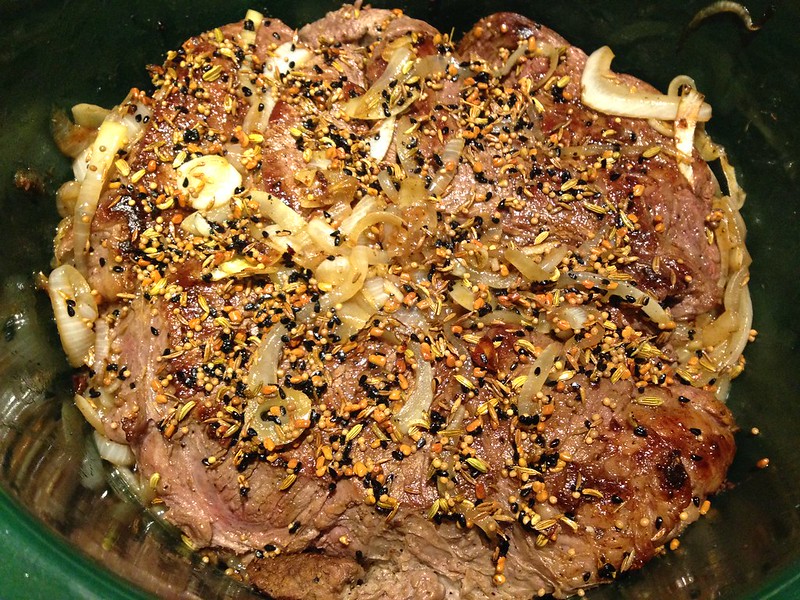 I put the beef into the slowcooker immediately after browning so that its juices released into the pot, making sure to layer the seasonings above and below it afterward. 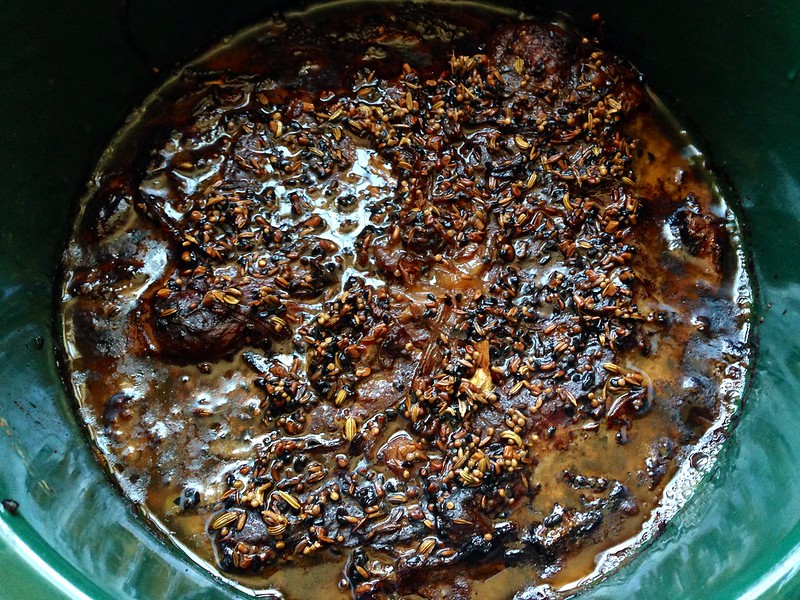 The beef releases a ton of liquid as it cooks. 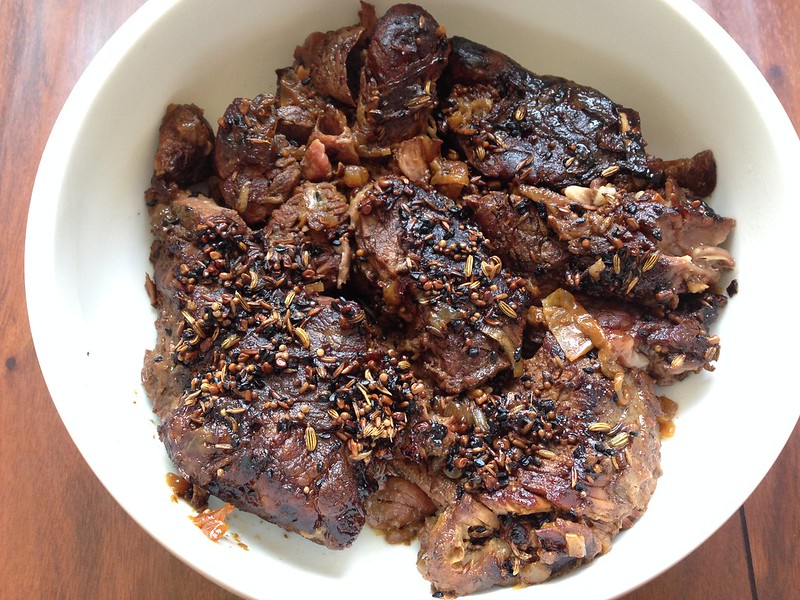 I removed the beef from the slowcooker… 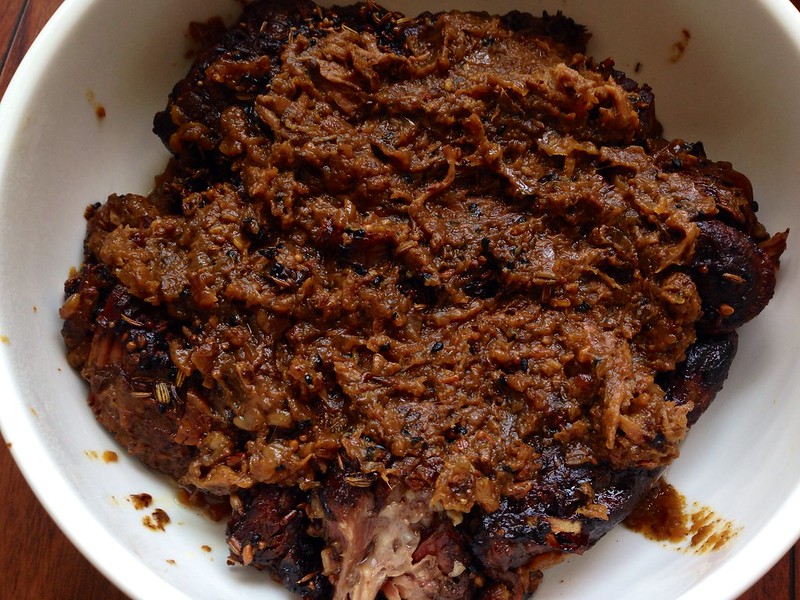 … and strained the leftover broth, resulting in a savory onion jam that I spread on the roast. (Rest assured that I saved those juices for a future gravy!)

* I’ve found panch phoron, sold in small green-boxed packets by Spicely, at Whole Foods and Rainbow Grocery and Berkeley Bowl in the Bay Area; I’m sure you can also find it in Indian grocery stores. If you’re in Berkeley, I’d also recommend stopping by Vik’s Chaat for their insanely cheap bulk bags (as well as their ridiculously delicious food, of course). 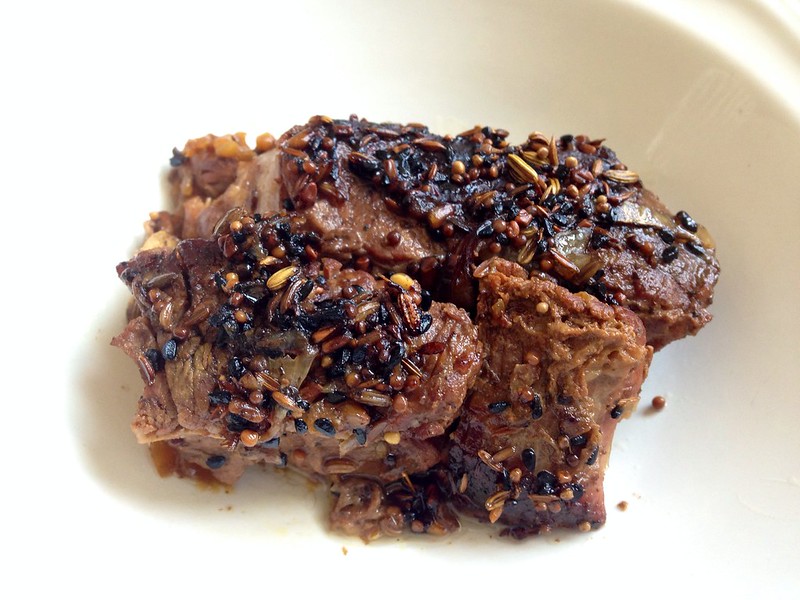