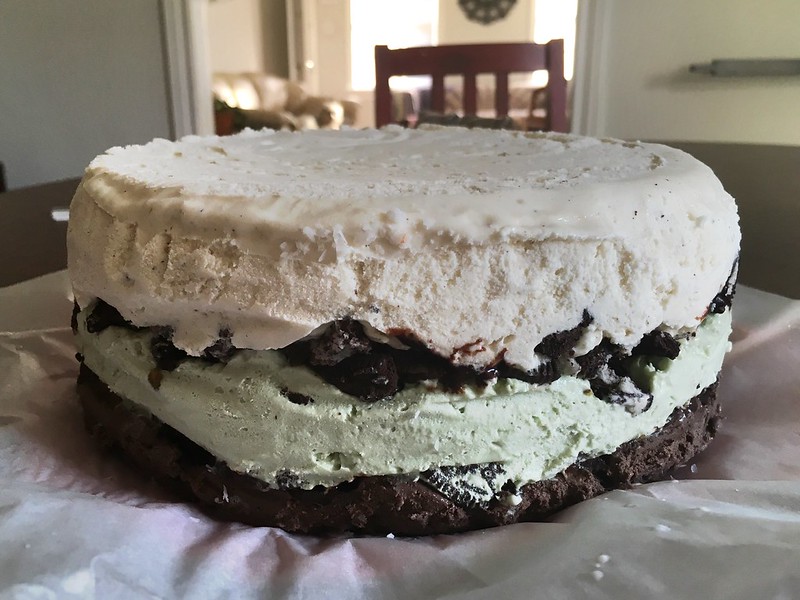 My ice cream cake, in all its un-iced glory.

Perhaps it speaks to my nature that, on the eve of my 27th orbit around the sun, I am posting about a cake I made for someone else’s birthday. But — onward.

This has been a year of insane growth, in which I’ve reinvented myself several times over. My friends have come to know (and name) my alter egos.

There’s Bad Jules, or BJ for short. Formerly known as Party Jules, BJ is the wild mustang who comes out after a drink or two. She is responsible for many fun nights, Ubers of shame, hungover mornings, and one (relatively uneventful) experience blacking out (oops). I embrace BJ with all my heart, as she is the person I once was in my younger, study-abroad years and have since neglected. She is the id to my ego, the Sasha Fierce to my Beyonce, the Miley Cyrus to my Hannah Montana.

There’s also Productive Jules (PJ), that version of myself who actually gets shit done. You can find her in one of a few beloved coffee shops, at a corner table, earbuds in, typing notes frantically, papers strewn all over the table. It is thanks to PJ that I’ve passed classes, written book chapters, and (mostly) checked all my emails. She is the functional piece of me who does all the adult-ing of which I am capable.

Finally, there is Mama Jules. This, perhaps, is the alter ego truest to my real self: the person who loves to take care of others. My lab knows to expect baked goods with every birthday. My colleagues know that I will make a signature batch of roasted broccoli for every event. My friends know that I will heat up leftovers for them if they come over (and Mama Jules always has leftovers). As I was told recently, cooking for someone else is the ultimate form of affection, in that it involves actual nourishment of a body. That lovin’ maternal instinct is what drives me to make and share food.

It is with great care, then, that I made an ice cream cake for a birthday. I’d considered baking an actual cake, but my (school-dominated) schedule and (grad student stipend-funded) pantry are not what they used to be. I gotta say, though… Though I personally thought this ice cream cake was a misshapen cop-out, everyone else in the room seemed duly impressed when I brought it out. People were mystified at how I managed to transform gallons of dairy into a big ol’ birthday dessert. It still comes up in conversation months later. I guess that’s what happens when you do anything involving ice cream.

My own birthday festivities will certainly involve indulgence — hopefully involving an equivalently copious amount of ice cream, in addition to beer and pizza, at a sweet new biergarten here in HTX. More importantly, though, I’ll be ringing it in with people who I’ve come to care about and vice versa. Late twenties… I’m ready for ya. I think. 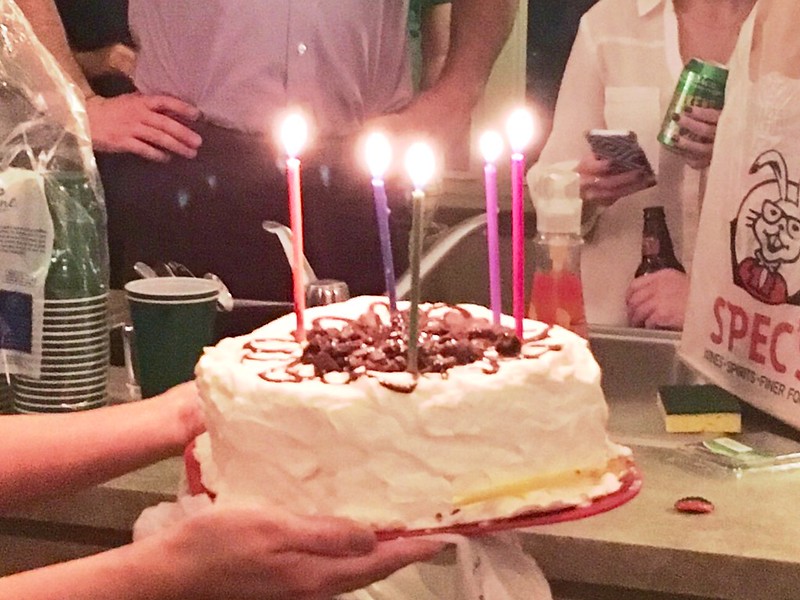 Recipe from the Kitchn

I am a fan if ice cream cakes that contain actual cake in them — but, alas, that is way too much fucking work for something that is supposed to be a bit of a shortcut. This Carvel-type version works just as beautifully: layers of cookie, cake, and chocolate syrup. No one will complain that it doesn’t remind them of their Baskin-Robbins standby. And if they do, cut them out of your life.

For each layer you are building onto the cake, you will need (ideally) about 4 hours to let it set. Add on another 4 hours for the “icing” of the cake, though preferably you’ll be able to store it overnight to let it fully harden. I started this ice cream cake 24 hours before it was to be served. I am guilty of not always reading recipes thoroughly beforehand (terrible habit! Do as I say and not as I do!) — but, in this case, I urgently recommend reading the directions fully before starting. Timing is everything here. It is imperative that the cake stay as cold as possible, and that you minimize the prep time on the countertop!

Finally, I scaled the recipe up slightly and non-exactly from the original (which you should totally follow, since it’s much more technical than mine!). However, since you’re really just building a sundae, you can get creative and imprecise with measurements. At the end of the day, you’re eating ice cream and cookies… so yeah.