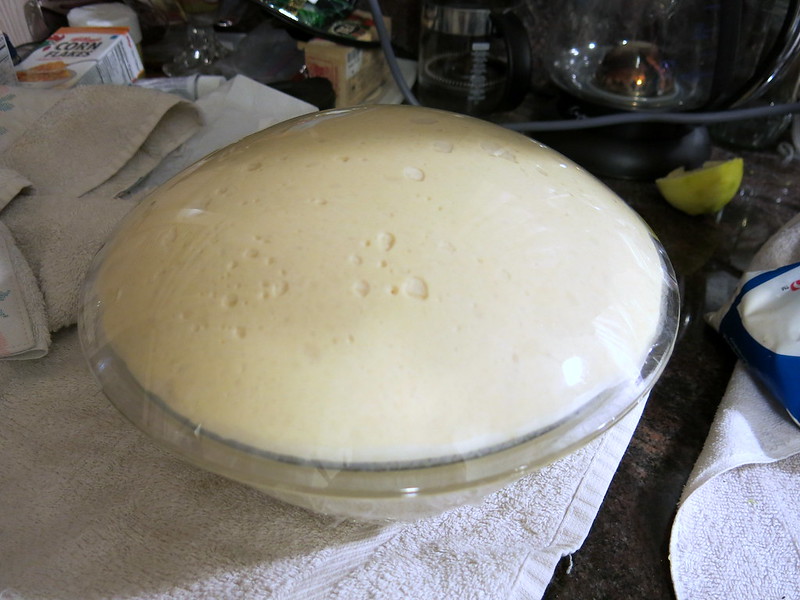 Earlier, I had decided that 2014 would be the Year of Yeast. 2013 was, undoubtedly, the Year of Pastry, in which I masochistically baked batch after batch of cold, flaky dough. That process, while nerve-wracking, was pretty simple; after a while, I knew my way around a pie tin pretty well. Yeast, however, was shaping up to be something else entirely.

I’d warmed the yeast in a bit of milk, disappointed when bubbles didn’t appear as promised. Soldiering onward, I’d mixed the ball of batter, placed it in an oversized mixing bowl, and left it, covered, to rise. This is where you find me now: home alone, scared, fully expecting the dough to rise out of its plastic prison and devour me whole.

At this point, I abandoned texting and hit dial instead. “Nancy! The dough… it’s fucking enormous. Ohmygod. Like, it’s going to burst out of the saran wrap.” I could almost hear my sister rolling her eyes on the other line. “Yeah, Julie, that’s normal. Just unwrap it, let it breathe and deflate a little. Okay? I’ll be home soon. Bye.” Click. 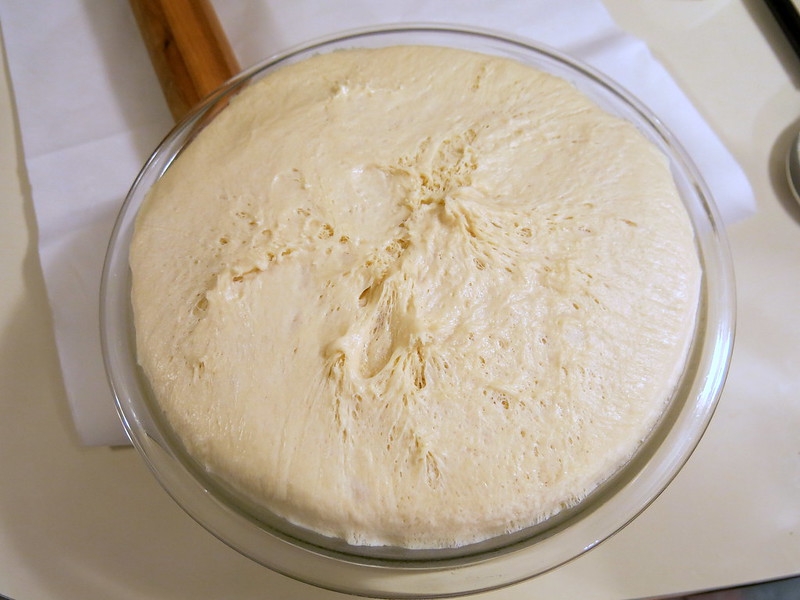 Obediently, I uncovered a few inches of the bowl. The dough within jiggled and retreated, catching the plastic wrap as it deflated slightly. I watched in amazement, prodding at the porous mass. Gummy. Springy. Kinda cute (?). Really cool. I was calmer now. “I can get down with this,” I thought.

The next morning, after seeing what this lump of fermented flour could do, I decided that I was definitely down with it. As I removed a pan of gorgeous sweet orange buns from the oven, nary a thought of yeast beasts popped in my head. All I felt was pure joy and admiration, having watched my little dough babies become full-blown, fully-risen cinnamon rolls. I’d been pining for these beauties since first seeing them; I’d dreamt of being woken up Christmas morning by their sweet orange scent. This holiday season, I made it happen — and I conquered over my fear of fermentation in the process. 2014: the Year of Yeast! 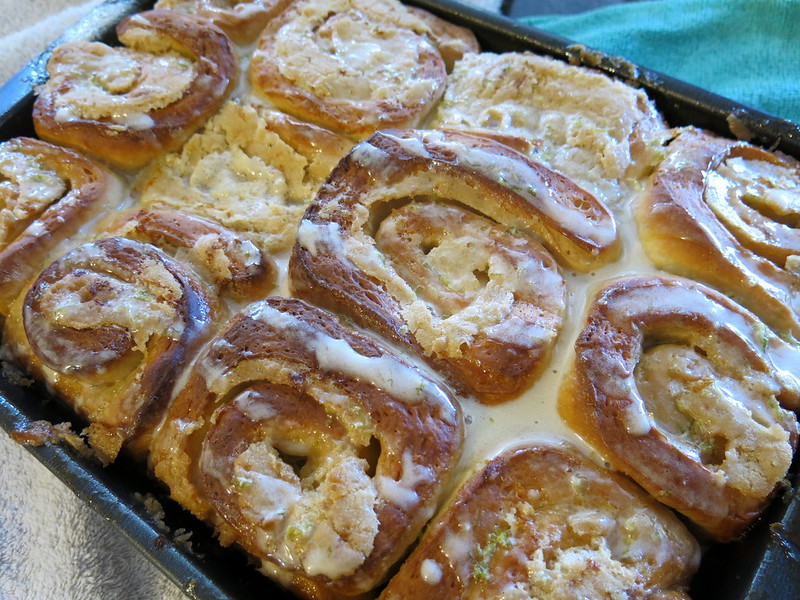 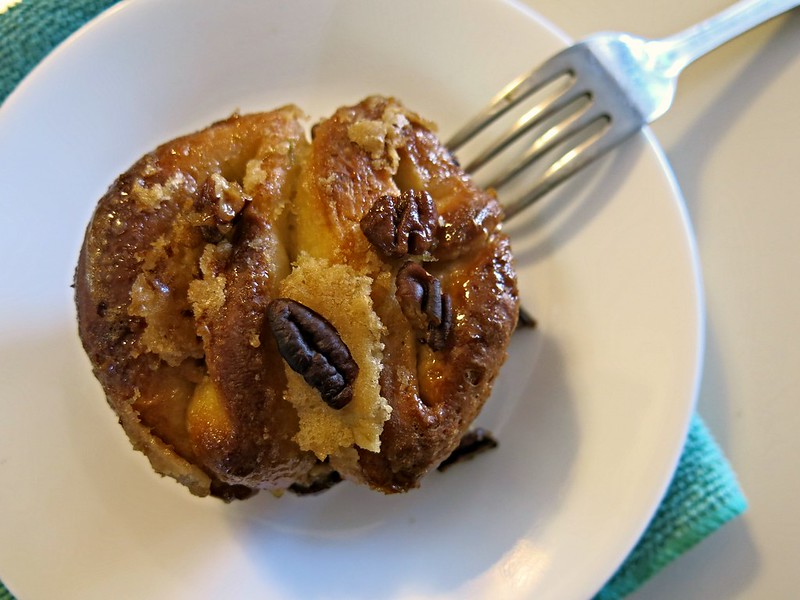 END_OF_DOCUMENT_TOKEN_TO_BE_REPLACED

As a child, lunchtime was always an Affair with a capital A. I’d sit at the table for hours, an untouched plate of rice growing cold in front of me, until my grandma finally relented and excused me. As I grew older (and my grandma’s patience wore thinner), I figured out a new tactic. I’d stuff my face with food and then run to the restroom, where I’d spit out my half-chewed lunch into the toilet. Oh, I know. Healthy, homemade Vietnamese food? Not for seven-year-old me.

Breakfast, though, was an entirely different story. There was one cabinet in my grandparents’ house, just barely out of reach of child-sized paws, where cereal lived. Glorious, processed, all-American cereal! Ever cunning, I’d turn to my grandfather and beg for a bowl of the stuff whenever the family matron was out of earshot.  I’d feel dizzy with joy whenever my grandpa relented and pulled down that black-and-white box of generic grocery store cereal to share with me. (This is the same man who would tip a spoonful of sugar into his milk and keep Werther’s butterscoth caramels in his pocket for us. Is it any surprise that I’m such a sugar fiend?)

If it’s not obvious from my last few posts, my love for breakfast is longstanding. Sadly, though, my favorite carb-laden, sugar-loaded dishes don’t always play nice with my body nowadays. Fortunately, I didn’t have to choose between happy and healthy at brunch a few weekends ago. I gave T a laundry list of dietary restrictions and she made it work, surprising me with unbelievably simple and tasty pancakes. Here, I present these two-ingredient babies two different ways — savory and sweet — in case you don’t share my grandfather-given sweet tooth.

END_OF_DOCUMENT_TOKEN_TO_BE_REPLACED

Around these parts, the word “breakfast” often rhymes with “eggs.” I love and adore these little nutritional powerhouses, but one can only have them boiled, fried and frittata-ized so many times before getting a bit of taste fatigue.

Fortunately, however, there are folks out there who are far more culinarily creative than me. I’d been hearing tons of Paleo-centric praise for Melissa Joulwan and her fantastic recipes. After coming across her Italian sausage eggplant strata for the umpteenth time, I decided it was time to just make it already.

Halfway through the process, I was suspicious. I wanted some unique techniques, and I sure got them. Melissa instructs you to beat and pour raw eggs into a cooled tomato base, resulting in a scary-looking, salmon pink-colored goo. Trust in the process, though, because the sauce will cook down into luxurious magic. I shared this dish with friends, who enthusiastically confirmed its addictive mix of flavors and textures: creamy, savory, tangy, hearty, healthy. Set aside the time to make this, because it’ll provide you with a week of eggy, edgy breakfast.

END_OF_DOCUMENT_TOKEN_TO_BE_REPLACED

I am having a love affair with all foods fermented.

Kombucha? Kan I have some more?

Maybe I’m just a groupie, but I can’t get enough of this probiotic phenomenon. Chief among my obsessions is kimchi, a spicy pickled Korean dish, typically built upon a base of plain, sturdy vegetables such as cabbage, daikon, and radish.

I didn’t really become a fan of kimchi until I started dating a person of Korean heritage. It wasn’t long before my tame tastebuds came around to its intense, complex flavors: satisfyingly spicy with a saliva-inducing hit of tartness and a faintly sweet finish. Now, I find myself eating it straight out of a plastic gallon-sized jar at 11 pm at night. In order to stop myself from pouring kimchi straight down the hatch, I threw some into a frittata for several days’ worth of breakfast. Even better, cooking it on the stovetop covered resulted in a fabulously soft and puffy texture, similar to another favorite Korean dish: gaeran jim, or steamed egg. Eggcellent.

END_OF_DOCUMENT_TOKEN_TO_BE_REPLACED

Only a few weeks ago, I was in full-fledged pumpkin mania. Pastries, waffles, donuts, fruit butter — I could not get enough gourd. My cravings dropped off considerably after Thanksgiving, but my cupboard still bulged with cans of pumpkin spice and puree. I decided to put them to use and bake a thick, hearty gingerbread, perfect for the tail end of the transition from fall to winter.

If you like molasses, you will love this bread; that darkly rich note sings louder than any other in the recipe. The flavor sent one person in particular over the moon, who raved that it reminded him of his favorite molasses cookie. This bread, however, is barely sweet, making it a fitting accompaniment for your morning cuppa. I highly recommend roasting (maybe even caramelizing?) persimmons for a garnish that’s both decorative and delicious.

END_OF_DOCUMENT_TOKEN_TO_BE_REPLACED

Last weekend, I stopped by my favorite bakery, Arizmendi, for my favorite baked good. While there, my eye landed upon a thick, glossy twist of bread: pan de muertos. I’m a sucker for seasonal things, but this one sounded exceptional on any occasion — a sweet, challah-like loaf flavored with anise, studded with orange peel, and dusted with sugar. It’s also festively “person-shaped” in honor of the Day of the Dead, but I saw something else. I won’t say what.

Of course, I had to have it. As you can see, however, it was a pretty sizeable hunk of bread. With quite a bit left over, I could only imagine one destiny for the remainder: french toast!

END_OF_DOCUMENT_TOKEN_TO_BE_REPLACED

There is nothing I love more than a good energy bar. The chewiness, the slight sweetness, the nutritional facts, even the satisfaction of breaking open the wrapper… I thoroughly enjoy every aspect of consuming a bar. Sad as it is, I don’t think I could go a workday without succumbing to the allure of a Luna Protein, Pure Protein, or Clif’s Builder pick-me-up. My name is Julie, and I have a problem.

I’ve realized, however, that a major part of the attraction is the fact that these things are not just energy bars. They’re also akin to candy bars with tons of foreign ingredients in them. I decided to take control of my addiction and make these babies the natural, old-fashioned way — something I should’ve done a long time ago, as they’re a breeze to make and much better for your body! After spending a bit of time experimenting in the kitchen, I emerged with a totally healthy treat.

END_OF_DOCUMENT_TOKEN_TO_BE_REPLACED

Even though I’m somehow able to wake up early to work out each day, I’m not Superwoman. I could never sacrifice the 10 minutes of sleep required to make myself breakfast each day.

I’ve experimented quite a bit with breakfasts over the past few months. Sometimes I get down and dirty with Clif bars. Other weeks, I’ll go on benders prepping healthy foods, like overnight oatmeal, Greek yogurt and Kashi “parfaits,” and egg whites cooked in mugs.

I’ve now entered a new phase of breakfasting: experimenting with tried-and-true ingredients. Introducing… healthy “french toast-inspired” bars. I know, they’re not the most glamorous-looking things out there — but I’m enjoying them immensely. The addition of golden raisins and chocolate chips makes them quite the treat, though they still pack quite the nutritional punch. Next time, I’m adding protein powder to make them balls-to-the-wall health food. You can also feel free to swap in various toppings; I imagine fruit, peanut butter, and nuts would all work wonderfully in this. Make this on Sunday and enjoy having breakfast throughout the work week — I sure will.

END_OF_DOCUMENT_TOKEN_TO_BE_REPLACED

Breakfast: yea or nay? Sweet or savory? I definitely fall into the “yay, dessert” camp when it comes to the first meal of the day. Unfortunately for me, French toast and pancakes are not always the most nutritionally sound option.

Luckily, I think I’ve found a pretty good compromise in the form of Greek yogurt “parfaits.” I’d given Greek yogurt a go in the past, but always found it too tart for my tastes. I’ve been trying it out in earnest recently and have been truly enjoying it with some naturally sweet elements. Below, my most recent bowl of yo’ with mangoes and almonds.

END_OF_DOCUMENT_TOKEN_TO_BE_REPLACED

The other day, I was preparing a simple breakfast — eggs and toast — and trying to figure out how I could spice up the dish a bit. It hit me: a wave of nostalgia-cum-inspiration.

As a child, my parents used to augment Western dishes with East Asian seasonings. I didn’t think much of it then, but as time has passed, I find myself craving the fusion of foreign and familiar flavors (have I mention I love alliteration?). Anyway, back to the point: eggs with Maggi sauce.

Maggi seasoning sauce is actually produced by Nestle in Switzerland, and is widely popular in Europe and Asia. I’m obviously not a cultural expert, but I can confidently state that no Vietnamese kitchen is complete without a bottle of this seasoning sauce. Its dark color, umami flavor, and usage as a condiment may suggest a relation to soy sauce, but it actually contains none of that magical legume. All the same, my family uses it the same way we would soy sauce, splashing it on rice, tofu, and (yup, you guessed it) eggs.

I was profoundly happy at having re-discovered a childhood treat. As I sat there, scraping up my Maggi-perfumed eggs with toast, I thought about how representative this breakfast was of my Vietnamese roots. On my plate, I had: bread (brought to us by the French and adopted enthusiastically by the Vietnamese, as the banh mi sandwich exemplifies); Maggi, a European import that has rippled in popularity across the continent; and eggs, a staple food wherever you go. My breakfast may no longer have been a classically American dish, but it certainly was classic to me.